Next time you’re walking, cycling or driving along Chichester Street, Donegall Square, Place, Road, Street, Quay or Pass, cast your mind as to who or what these vast tracts of Belfast city centre are named after. If you’d thought they’re named after County Donegal…you’re wrong, so go stand at the back of the class!

The giveaway is that the Belfast Donegall related place names are spelt with two ‘L’s, not one as with the north-western Ulster county. They were named after family of perhaps the most influential character in the development of Belfast; Sir Arthur Chichester. The Chichester family were the landlords of Belfast from the 17th century until the mid 19th century, having been granted the title of Earl of Donegall in 1647. Much of the layout of today’s city centre is named in homage to them.

But before we discover just who Arthur Chichester was and why half the town is named after him, let’s have a quick potted history of Belfast.

There have been settlements in the area since the Mesolithic era, but the first documented reference was in 668AD recording a battle between two tribes, the Ulaid and Cruithin at the “Fearsat” (sandbank) of the Lagan River. Tribal fighting in Belfast…imagine that!

The first actual reference to “Bel-Feirste”, roughly translated as “mouth of the sandbank ford”, was in 1476 with a reference to the original castle being under control of the O’Neill dynasty.

By the end of the 16th century, English rule in the north of Ireland was hanging by a thread to say the least. The native Irish had taken Belfast Castle back from the English Lords in 1597 in grisly fashion; “all the Inglishe men in the ward were hanged and their throats cutt and their bowels cut oute of ther bellyes”. Delightful stuff I’m sure you’ll agree. However the Castle was quickly retaken by Arthur Chichester’s brother John, who put those troublesome native Irish disembowelers to the sword.

However things were not to bode well for John Chichester, for later that year he was beheaded by the vengeful MacDonnell clan who then played football with his severed head. It has not been verified whether their descendants went on to play for Glentoran or not. 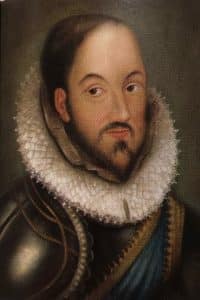 An Englishman whose family had puritanical sympathies, Arthur Chichester was a complex man who played a pivotal and controversial role in Irish history. A soldier and adventurer, he moved to Ireland following a trial for highway robbery in England. Despite his crimes, he appeared to be a favourite of Queen Elizabeth and it’s easy to picture him as a Blackadder type, continually flirting with Queenie. Or maybe not.

Consequently, he was forgiven for this “youthful indiscretion” and his military prowess meant he quickly rose through the ranks, becoming “Sergeant Major” of Elizabeth’s Irish forces, in other words a top general under Mountjoy, the supreme commander.

He was knighted in 1595 for his role in the Irish wars, rewarded specifically for his efforts “to break up that barbarous nation by conquest and sow it with seeds of civility”

Arthur was the architect of the military policy in Ulster during the O’Neill Rebellion known as the Nine Years war between 1594 and 1603. As such he was responsible for a scorched earth policy that helped end the war in typically brutal fashion, potentially earning him a reputation worse than Cromwell.

Previously governor of nearby Carrickfergus, Arthur Chichester was granted “the castle of Bealfaste” in 1603 before being appointed Lord Justice of Ireland in 1604 by King James 1st, henceforth to be known as 1st Baron Chichester.

He presided over the Ulster Plantation and following the Flight of the Earls in 1607 he confiscated their lands and divvied them up between the Scottish and English settlers. Despite this he did not advocate the wholesale removal of the Gaelic Irish from the planted lands and they continued to live cheek by jowl with the planters until this very day. Let’s just say, that’s complicated.

He set about developing ancient Belfast into a more modern town, something that he hoped would make him huge wads of cash, primarily from rents and profit from trade on his land.

His influence on early Belfast is captured in the stunning City Hall mural by famed local artist John Luke. It depicts him reading the town’s newly granted charter to an assembly of townspeople in 1613. With Cavehill in the background and linen and shipbuilding both represented, the mural encapsulates much of what Belfast is about. The charter established Belfast as a corporate body enabling the Chichesters to effectively appoint the town Sovereign (bit like a Mayor), burgesses and suchlike. Whilst this gave early Belfast a semblance of local government, power remained firmly with the Chichesters over the centuries, even when for the most part they were absentee landlords.

The charter is on display in Belfast City Hall, but given Chichester was something of a tightwad, it is not a grand illuminated document as was the case with the charters of Dublin and Derry, as he didn’t want to pay for such fripperies.

During the medieval period the area north of the Farset river was undeveloped. Chichester decreed that area be laid out and built upon, with notable streets such as High Street, Waring Street (originally called Broad Street) Royal Avenue (formerly known as Hercules Lane/Street) and what is now the modern day Cathedral Quarter. So many Belfast place names show the Donegall influence, pretty much anything with Chichester, Donegall, Ann, or Castle in fact.

Again, a bit like Blackadder, Chichester was always skint and on the lookout to make more money. He became obsessed with his finances claiming that the family mansion, Belfast Castle, had “for the most part fallen to the ground” leading to more taxation and raised rents. The dilapidated Castle was rebuilt as a mansion house, but Arthur chose to live in Carrickfergus instead. Bet he wouldn’t do that nowadays? (Only joking Carrick people….!)

Chichester saw Irish Catholicism as the major threat to the Crown in Ulster and oversaw widespread persecution, even ordering the execution of two Catholic bishops. However, his attitude moderated with age and when he eventually became less harsh towards the native Irish, he was recalled to England to explain himself to King James.

Interestingly, perhaps demonstrating a modicum of inclusiveness, he was responsible for the inclusion of the Irish harp onto English coinage.

He died in London in 1625 leaving massive debt behind. Buried in St. Nicholas Church in Carrickfergus, his memorial there is said to be the finest Jacobean memorial monument in Ireland

Since Arthur’s only son had died in infancy, his lands passed to his brother Edward whose son Arthur, who would be named the first Earl of Donegall, carried on much of the development of the town. Thus the Donegall dynasty was born and they remain inextricably linked to Belfast, with the chained Irish wolfhound on the Belfast coat of arms being from the Chichester family’s own coat of arms. Many of the subsequent Earls and Marquesses of Donegall were also called Arthur in honour of the founder and the influence of the Donegalls only petered out in the latter part of the 19th century when much of the Belfast land was sold off to pay gambling debts.

Oh and if your were wondering why there’s an extra “L” in the surname, it is believed to have been down to a clerical error upon the first Earl being granted the title in 1647…. in other words, it’s a 373 year old spelling mistake.