I’m a Belfast boy born and bred and presumably like some of you, many of my formative years were spent in the 1970s, in many ways a terrible time for the city…the worst of the Troubles.

However for little skinny James with his girl’s haircut from Rugby Avenue, the 1970s were a time of typical boyish 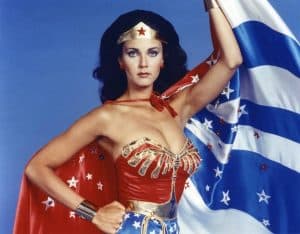 excitement; Beano, Monster Fun and 2000AD comics, Action Man and Evil Knieval toys and Starsky and Hutch, the Professionals and Wonder Woman on a 3 channel telly that took a couple of minutes to properly warm up. I confess that ever since putting away such childish things, Lynda Carter still holds a special place in my heart to this day….

Despite living pretty close to a sectarian interface, the soundtrack of shootings and bombings never too far away, my sister, mum, dad and me lived a fairly normal, happy life. Yeah we were pretty skint, but we were very lucky that none of our family or close friends were killed or injured as a consequence of the conflict that was tearing our society apart. That is a fact I will never forget.

The highlight of the week was the Saturday afternoon trip into town. We nearly always walked, but if the weather was keek or we badgered my Mum enough, we occasionally got the bus from the “White Church” in University Street. The old cushioned seats on the red City Buses were nearly always slashed and graffitied which explains why they were eventually replaced by horrible hard plastic ones. Quite often the bus smelt of piss. Not mine….honest.

Once we arrived at the City Hall, a hurdle to negotiate was the Ring of Steel. Erected in July 1972 as a consequence of 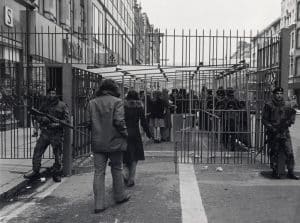 the Provisional IRA commercial bombing campaign, it was a huge steel security edifice that surrounded a large portion of the main shopping area. It should have been a shocking, unsettling experience, but it wasn’t for me. It was normal, a bit exciting, fun even. I can hear the metallic clanging of the turnstile to this day and picture the queuing up in the tunnel of corrugated plastic and steel to be searched by the Civilian Search Unit. The bored squaddies lazily clutching their SLRs watched on, minds elsewhere, presumably on girlfriends, cheap pints in the NAAFI and when they were going to get out of this shit-hole.

Once inside the relative safety of the ring of steel, it was pretty much Mark and Sparks, C & A, British Home Stores, Littlewoods…all the 1970s greats! Despite the Troubles, the city centre was always bunged, with shouts of “Six Tele” on every corner and if we made it to Cornmarket you might even see Mickey Marley and his dirty death trap…sorry, roundabout.

The main reason I agreed to go into town, apart from the distinct possibility of a kick up the arse from my Mum if I didn’t, was the chance to go to Leisureworld in Queen Street. This toy emporium opposite the RUC station was the absolute dog’s balls, the Mecca for kids from Belfast and further afield, two storeys packed full of pure joy. They seemed to have every toy imaginable and at that time I’d a pretty good imagination.

I was obsessed with increasing my legions of Action Men and getting a Scalextric bigger than the single loop I already had, even though I could never get the cars to stay on the feckin’ tracks. If you wanted something rather than just look in wonder however; you either had to save up, or wait for Christmas or a birthday. Can’t imagine kids today being so patient somehow.

Once shopping was done, Saturday also meant a sit-in chippy tea at the Knife and Fork in Wellwood Street off Sandy Row on the way home, fish supper with bread and butter on the side of course and a Coke chaser. Don’t think I’ve tasted anything as good since. We made it back in time for Dr Who and Jim’ll Fix it…..so many monsters on our TVs in the 1970s!

OK so there may have been many other monsters out there in the big, bad world, but my tummy was full, I’d got my Leisureworld fix and I knew in my heart Lynda loved me….