Line Of Duty – All Aboard The Belfast Bandwagon!

If you’ve read my past blogs, you’ll know I’m a child of the 70s and spent much of that troubled era watching the telly. A mere three channels in those days of course, on our new colour TV!

In addition to my one true love, Wonder Woman, I couldn’t get enough of the cop shows. The American stuff such as Starksy and Hutch and Kojak was alright, but my favourites were the British productions. I would regularly feign a sore tummy in order to sneak a quick watch of The Sweeney, the then post-watershed / hard-as-nails show about the Flying Squad with famous lines like “get your trousers on, you’re nicked!”. No such thing as a problem-solving model, or post-trauma counselling with the Sweeney, just shooters and whiskey.

My favourite though was The Professionals, which whilst not strictly a cop show, featured many a car chase, shoot out and bed- 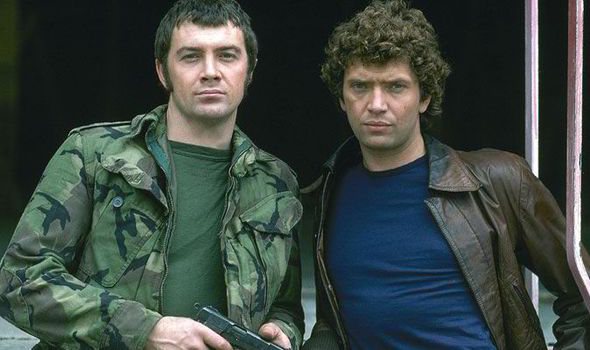 hopping…just like the real police! I so wanted to be Bodie, the ex-SAS man turned CI5 agent who blew bad guys away with his Browning 9mm pistol and was a big hit with the ladies.

Obviously there was nothing of its ilk set in Northern Ireland, that would have been rather difficult policing waters to navigate at the time and quite frankly the vast majority of film and TV creations about our wee country were pure shite.

So imagine my joy a few years ago when I heard that BBC’s massively popular Line of Duty was to be filmed in the Belfast area from series 2 onwards. The police procedural about Anti-Corruption Unit 12, AC-12 for short, is based within the mythical Central Police Force and the setting is simply referred to as “the city”. The fantastic news is that the scenes where AC-12 battles it out with the feared OCG (organised crime group) are instantly recognisable as Belfast, which has regularly set the local Twittersphere alight with avid fans identifying locations. I confess I’ve had to re-watch episodes on occasion as I was more concerned with seeing places I know rather than concentrating on the plot.

Belfast Central Library serves as the Headquarters for Central Police, a building that remains a fully functioning part of Libraries NI. How many times have we seen the Gaffer, Superintendent Ted Hastings emerge onto Royal Avenue with his tail between his legs after a bollocking from the Deputy Chief Constable?

The interior shots for Central Police HQ are in fact an office at the rear of the Ulster Reform Club a short distance away on Royal Avenue (beside the Tesco Metro). Take a look out the window as Ted is getting a carpeting and you’ll see Kelly’s Cellars and St Mary’s Church in the background. At least he has the option of going for a pint or having a good pray afterwards!

The Invest NI building opposite the Ulster Hall on Bedford Street is the site of THAT balcony inside AC-12 HQ where Ted and co. get a juke at some poor fecker on their walk of shame as they are being trailed in for an interview.

But perhaps the most iconic of all the Belfast locations for Line of Duty is the subway betwixt the bottom of the Albert Clock and the Ulster Sports Club on High Street, the scene of many clandestine meetings between Kate and Steve. It really does have the wow factor, although unfortunately at times it’s a case of “wow, this place really does smell of piss!”

So many bars have featured in Line of Duty it’s nearly easier to mention the ones that haven’t been used, but some of the top ones are; the Duke of York, the John Hewitt, Union Street Bar, The Crown, Katy’s and Sweet Afton. In fact this is giving me an idea for a Line of Duty pub tour! Must speak to the Gaffer about that…. 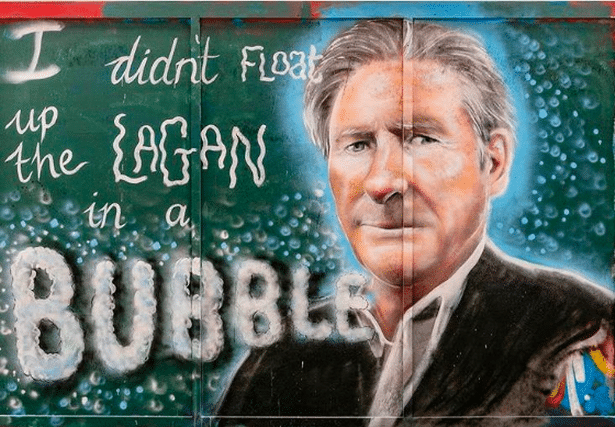 I genuinely love Line of Duty, it’s a well written, exciting cop show that leaves you wanting more. The fact that Adrian Dunbar who plays Ted Hastings is a local fella just adds to the Northern Irish mystique. His Ted-isms are priceless and have introduced phrases like “I didn’t float up the Lagan in a bubble”, “houl yer whisht”, “Jesus, Mary, Joseph and the wee donkey” as well as my personal favourite “wee gobshite”, to a wider audience. As a Belfast boy, this fills me with immense pride!

And just to bring this nonsense full circle, the radio call-signs used by Bodie and Doyle from the Professionals were “37” and “45”, the same used by Kate and Steve in Line of Duty – a nice nod to the cop shows of the 70s from creator Jed Mercurio.

DC Tours have released a free self-guided audio tour (created by James himself)– the ‘Line of Duty Locations Trail’ on our ‘DC Tours Belfast’ app. Just search for our app in your app store and the tour is available as a free download, together with a range of free and premium tours.