The Lagan and the Big Stink

Recently I’ve become slightly obsessed with the rivers of Belfast, the Lagan and its tributaries, now mostly hidden from the outside world in utilitarian sewer pipes.

I think it started off when I was told a few years ago that the River Farset ran under the length of High Street and on to the west of the city via Bank Square, once aptly known as the “Back of the River”. The source of the river is up past the top of the Crumlin Road and it emerges into the Lagan via a large pipe near the Big Fish. Not very auspicious I know.

In fact, a couple of years ago when the unfortunate city centre branch of Primark in the Bank Buildings was engulfed in fiery fury, a pal told me that he and his Fire Brigade colleagues had come up with the great idea of plugging their hoses directly into the Farset via a man hole cover in Castle Place and dousing the inferno with river water. That worked OK at first, until it was low tide and they ended up spraying what was left of the historic building with mud! 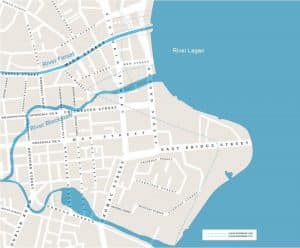 Anyway, this all encouraged my minor obsession with the subterranean Lagan tributaries. Spurred on by an old Belfast Telegraph article by my journo friend Linda Stewart about the source of the Farset, it got me wondering about the others such as the Blackstaff aka the Owenvarra which I kinda knew about too. It dawned on me that the BBC studios on Great Victoria Street are named after the river, because it flows beside it.

I then recalled an old bridge at the junction of the Dublin Road and Bedford Street which I regularly crossed as a kid, and the partly open Blackstaff which ran beneath it back then, and then another moment of clarity; that’s why the Wetherspoons at that very spot is called The Bridge House….it all makes sense!

Eventually I bought a marvellous book on the subject, funnily enough called “Rivers of Belfast”, where I learnt not just about the Farset and Blackstaff, but also about the Connswater in the east of the city.

Did you know it’s only called the Connswater in its tidal section?

It becomes the Loop river not far from Conn O’Neill’s historic bridge and  before it reaches the Hollow made famous by Van the Man in Brown Eyed Girl. Further up it is the Knock and Cregagh rivers, amazing stuff I’m sure you’ll agree? Or maybe not.

Also, the Forth river that runs under much of loyalist north and west Belfast becomes the Clowney when it reaches nationalist areas and it got me thinking can you have Protestant or Catholic rivers? Should there be a peace line along it at some point, a watery interface if you like? Admittedly by this stage I was probably over-thinking things. My bad.

I’ll admit to becoming mildly obsessed with the rivers of Belfast and have yet to meet anyone who shares my interest. I’ve even had to pay the boss to post this blog and I’ve noticed my family and friends glaze over when I mention it, but do I care? No! …Well, maybe a little.

Perhaps it all harks back to me growing up in the Holyland area beside the Lagan? This was before the new weirs were built along the river in order to address pollution, so when it reached low tide during the long, hot summers in the 1970s and 80s by crikey did it stink! Thanks to the mudflats releasing a mixture of methane and hydrogen sulphide gases the entire hinterland of the river was blanketed in an aroma of rotten eggs, which proved useful when you broke wind, as you could simply blame it on the Lagan.

It’s nice to get out there and try to follow the course of these rivers, despite so much of them being covered over. Greenways have been created along some of their courses and more are planned.  If nothing else it’ll get you out for a walk and see parts of the city you’ve never been to.

And one last thing; to this day, despite living nowhere near the Lagan now, if I’m accused of fouling the air with a nasty smell after a few Guinness whilst watching the rugby…I still apportion blame to the Lagan. Don’t think anyone believes me, but old habits die hard.