Policing has never been easy in the north of Ireland. In fact, even describing this place as “the north of Ireland” isn’t easy, since you might then assume I kick with a certain foot! However you can relax, as I’m talking about a time before the state of Northern Ireland came into being and the term “occupied six counties” had yet to be coined. 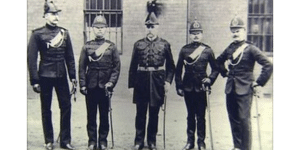 In 1907, just before the Home Rule issue was about to come to a head, the Royal Irish Constabulary (RIC) had other issues on their mind. Policing has always been a political football in Ireland, and at that time much of police business across the island was concerned with enforcing the will of wealthy landlords and other business interests.

Belfast at the turn of the 20th century was at the height of its industrial and commercial prowess and much of this relied upon the port. Needless to say, pay and working conditions were not at the top of the agenda of the city fathers and merchants who governed the port and docks. Under the leadership of that colossus of the trade union movement Jim Larkin (National Organiser for the National Union of Dock Labourers), a battle royale commenced in the form of the Docker’s and Carter’s Strike during the spring/summer of 1907.

Hundreds of workers within the docks had been sacked following their demands for union recognition and they had been replaced by “scab labour” under police and military escort.

RIC officers themselves had not received a pay rise in 25 years and were working a huge amount of unpaid extra hours escorting the “blacklegs”, no big overtime for the peelers in those days! Detective Constable Willie Barrett, a Kerryman based at Musgrave Street barracks in Belfast was an admirer of Jim Larkin and refused to escort the strike-breakers.

He was promptly suspended from duty. However, on the 24th July, Willie Barrett convened a large meeting in the reading room at the barracks. 300 police men were in attendance and were in militant mood. When RIC County Inspector Morrell arrived and ordered everyone out, he was punched to the ground by a Constable McGrath. Pandemonium ensued and CI Morrell had to run from the building.

A few days later, Barrett held a second meeting at Musgrave Street, this time with 700 RIC men (75% of the Belfast police force ) filling the station yard and clambering on top of the stable block and barrack walls. Emotions were running high with the officers threatening to wreck the place if Willie Barrett wasn’t re-instated.

At a later rally at the nearby Custom House steps, a favoured spot for the orations of Jim Larkin, Barrett was carried on a chair from there round the police stations of west Belfast with large crowds cheering his p 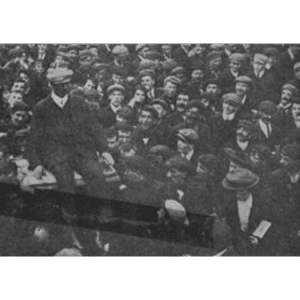 So worried were the RIC authorities that this dissent would spread across Ireland, military reinforcements were drafted into Belfast. Many Belfast police barracks were occupied by the military and for a short time it seemed there could be open conflict between the forces of law and order on the streets of the city. In fact, little did the military know the dissident peelers had relieved the station armouries of weapons in the run up to the planned strike, so any conflict may have been deadly.

However, four days before the threatened strike commenced, 250 of the troublesome Belfast officers were transferred to far-flung parts of the island with immediate effect. Musgrave Street alone lost 35 men in the purge. Barrett was sacked and the “police mutiny” was crushed.

Former RUC chief Constable Ronnie Flanagan, who hails from a dockers background, cited Willie Barrett as a personal hero of his and it’s interesting to muse as to how things might have turned out had the Police mutiny been successful.

Next time you’re passing by the ultra modern Musgrave cop shop, remember Detective Constable Willie Barrett and what might have been.