That time Donzo Won An Award

2019 saw me start the year on a three-month sabbatical due to post traumatic stress disorder as a result of taking 15 Basque teenagers on a tour that concluded precariously on the observation deck of the Victoria Centre. Mark, admirably seeking to make a silk purse from a sow’s ear and with an encyclopaedic knowledge of the tourism world, nominated me for the Wanderlust World Guide Awards to cheer me up. Wanderlust magazine is the kitemark for contemporary issues in the international travel market, their awards coveted and prestigious.

The process invited tour participants to vote and comment on their experiences with the nominated guides. Not specific to each award, a panel of experts assesses the nominees and classify them to the appropriate award. Thousands of guides are nominated, then over 8 months they are whittled down to a final dozen and the awards take place.

And so in October of last year Mark and I headed to the bright lights of old London town. I even acquired a new passport as I had no photographic ID at all, Mark purchased a toothbrush and tuxedo. With our hotel booked in the Kensington area we were ready to, if not rock n roll, certainly to shimmy a little. Arriving at the city of London airport in the old docklands of the east end we trained and tubed it to the west of the city. Mark thankfully knows the city inside out having been a minder for Boris Johnson when he was mayor. I was like Paddington Bear with a Belfast accent.

First night, booked into our hotel surrounded by beautifully facaded buildings and Porsches at every o’clock, we did our recce of the area, found a cracking wee Turkish place and proceeded to eat three animals between us. The following morning I treated Mark to his first ever Greggs breakfast. I’m too good to him, it has to be said.

We headed out to Westminster to see the various Brexit protests, dandered about pointing at buildings and the 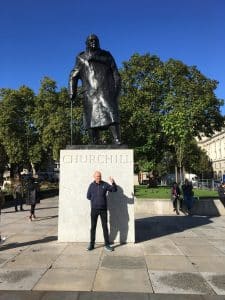 bridge the Death Eaters attacked in Harry Potter, said “ooh!” a lot then headed to the pub where the finalists were to meet with Lyn Hughes, the CEO and founder of Wanderlust. At this point Mark made me let go of his hand, promised he’d see me later, tucked my shirt in and ran off.

It was really at this point I started to realise this was a big deal. Finalists from Cambodia, Australia, Sri Lanka, East Africa, Canada, Europe and all other ports between listened to Lyn talk movingly about the Wanderlust Awards established in memory of her late husband and clearly her life’s passion. With our bellies well filled we then headed on a guided tour of classic London pubs. The poor guide for this task only found out on his arrival who and what the gig was. He near shit. That said he was very good and I enjoyed chatting to him.   Apparently he tweeted later that night that he’d been talking all day to the U.K. tour guide of the year that afternoon.

The pubs were fascinating, and a few nominees were taking full advantage of the Wanderlust hospitality budget whilst I sipped my fizzy waters. My favourite was the pub that was spread over two buildings facing each other and was the local of Benjamin Franklin before he went to the American colonies to be a revolutionary and fly kites with keys attached in lightning storms.

The big gig was approaching, and we made our way to the Royal Geographical Society where the ceremony was staged. Again more touring ensued, crazy global maps from centuries ago, replica dinosaur eggs and a look at the three-hundred-seater balconied auditorium where it would all happen. That’s when I really felt my first jangle of nerves. By now we were hot-housed together in a very grandly timbered reading room.

“Frig this” I thought, “I need a feg.” At the main entrance there was a tuxedoed doorman who really looked like a pub bouncer checking tickets. What ensued is true, I posted about it on social media after. – I chat with him for several minutes about the awards, being nominated, DC Tours in Belfast and what it is we do. Then I step out, have my feg (cigarette!) and as I walk back towards him I can see his expression….as a bouncer for many years it’s an expression I know, I’ve worn it myself enough times. He friggin’ stops me and asks me where I’m going! 6 foot two, bald head, earring, Belfast accent, what is there to be suspicious of?!

Back inside and we’re on. It’s impressive. Lyn speaks, some other fella does a warm-up routine with anecdotes he’d fished from us in the hot house room. A drunk woman heckles him (aye, she got in alright..!)and he loses his thread a little.

To be honest and I don’t wish to be boastful but as a political animal I’d sort of figured how it might pan out. It’s not as political as the Eurovision song contest scoring but there’s an element. I knew I wasn’t going to get World Guide Award, we are too geographically and locally focused but I’m not getting one of the more generic ‘good tour guide’ awards, it’s going to be the Top UK Tour Guide one for a variety of reasons. People had friends, family and supporters in the audience, whereas Mark was out there somewhere amongst three hundred people and the lights were dazzling my view.

Then Lyn calls it “The Top UK Tour Guide of the Year 2019 is …..Paul Donnelly of DC Tours Belfast.” I bounce up in my jeans, guddies and DC Tours T shirt. One big lad from west Africa was in his tribal costume. The bouncer was better 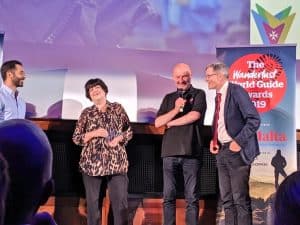 dressed than me. I didn’t care. I suddenly felt really buzzing. Simon Calder, the skeletal, disarmingly goofy but actually very sharp travel correspondent for the old Independent paper and now the BBC presents the award.

Then he charmingly tells me of his problem recently in travelling to our second city in the North West and how nobody would say it’s actual name…..”what do I call it?” he asks. Well, I didn’t spend years on the door of Lavery’s Bar, working in interface communities and facilitating dialogue with ex-combatants to trip up on that one. But it works, I give a reasonably clever answer, Lyn and he and a fair section of the audience laugh appreciatively and it’s great. As I leave the stage I notice the applause is definitely louder and warmer than when I went up. Happy days, they’ve listened and DC Tours has had the flag for ourselves and Belfast raised higher.

Just as a footnote the world guide winner was a crackin’ young fella Jack from Cambodia. He grew up on the streets begging, by fluke he guided somebody who was lost for a few dollars and now guides in the forests and jungles of Cambodia on two and three week treks, really incredible. I asked him had he ever had to wrestle a tiger on tour and he said thankfully he hadn’t and hopefully never would. Then he jokingly asked had I?  I said “no we don’t cover North Queen Street and the Limestone Road.” He hadn’t a notion what I was on about.