Hercules is a name I’ve always liked. There was of course that big bloke of Roman mythology fame, son of Jupiter and all that, but it was also the name of the long-suffering horse in Steptoe and Son and that was one of my favourite shows when I was a young cub. A more innocent time when calling someone a dirty old man wasn’t likely to get their windies put in.

Anyway, if you happen to be traversing Belfast’s Royal Avenue any time soon, try and imagine what it looked like prior to the modern streetscape you see before you. In fact, try and imagine what it smelt like.  Before it was widened and improved c.1880, Royal Avenue, once one of Belfast’s grandest thoroughfares, was known as Hercules Street and to be blunt it must have feckin stank.

Described by a local writer at the turn of the 19th century as “a hive of odoriferous activity”, Hercules Street was the 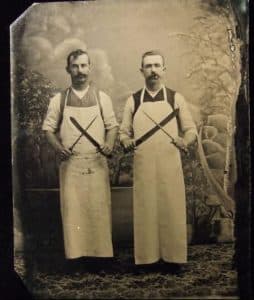 home to the large majority of the burgeoning town’s butchers and slaughterhouses – 47 of them to be precise. Don’t forget this was a time when sanitation, sewerage and health and safety were non-existent, thus much of the animal waste and carcasses were simply dumped in the street or the nearby Farset River; essentially an open sewer running down the middle of High Street at the time.

Another local correspondent, writing in the News Letter in 1785, and clearly anticipating the invention of TripAdvisor was worried enough to write that the shops along the street – “for nastiness have not their equal in the meanest village in Ireland, they have been noticed by travellers and by some of them recorded to our discredit”.

Go on, just try and imagine the stench of the place, you know you want to. In fact it was due to the efforts of Belfast’s grandees to limit the filth created by the town’s flesh markets that they decreed they should all be concentrated in Hercules Street in order to protect the rest of the town from the whiff. I’m sure it seemed like a good idea at the time.

Rewind the clock to the late 17th and early 18th century, the street was originally known as Harrison’s Lane when the reality was this area marked the northern outskirts of early Belfast. The landlords of Belfast, the Chichesters, aka the Earls and Marquises of Donegall, set out plans to develop the area north of the Farset.

Harrison’s Lane was ear-marked for expansion around the same time as Waring Street and what is now the Cathedral Quarter. By the latter part of the 18th century, the area had been built up, initially being renamed Hercules Lean or Lane after politician and landowner Hercules Langford Rowley, before becoming Hercules Street by the early 19th century.

So thriving and popular was “the Street” as it was simply known by the locals, a quote from Cathal O’Byrne in the 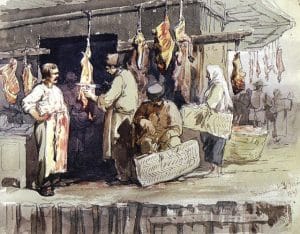 rather wonderful ‘As I Roved Out’ book paints the picture, “water carriers and hawkers, farmers and fisher folk, merchants, pedlars and huxters, egg wives* and waggoners all seemed to find their way to Hercules Street”.

The street was also famed for its melodious strains wafting through the area during the evenings, with many of the street’s butchers also being traditional Irish musicians. This certainly would have contributed to the growth in the Belfast entertainment scene, with music halls in nearby North Street, Victoria Square and in the Assembly Rooms at the Four Corners on Waring Street.

In 1832 Hercules Street was the scene of the first election riot, but certainly not the last for this tumultuous part of the world. A triumphalist victory parade was held by the Tory candidate, which infuriated the largely catholic population of the area. Trouble broke out and when the Army arrived, the Riot Act was read and resulted in volleys of shots being fired. Four people died.

Immediately prior to Belfast becoming a city in 1888, Hercules Street was cleaned up, widened and improved. The uneven surfaces were levelled and the low buildings were replaced by the type of grand buildings that typified Belfast in its industrial and commercial heyday. The old entries and small streets disappeared as did the stench of the butchers, replaced by fine shops and hotels such as the Grand Central. 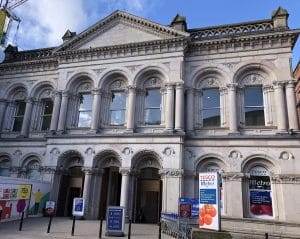 wealthiest man at the end of the 18th century, businessman, Volunteer commander and wannabe slave trader Waddell Cunningham. Situated in what was then known as Hercules Place, this once grand townhouse was replaced by a bank in the 1860s designed by famed architect WJ Barre and is now the fancy Tescos that sits betwixt the Bank Buildings and the Ulster Reform Club.

Presumably as a nod to the old name, Castle Street’s Hercules Bar remains a popular spot with locals, so if you fancy nipping in for a quick drink, cast a thought to the olden days and try not to imagine the stink….

* fear not, I’ve no idea what an egg wife is either