The Blindboy Experience (Part One)

In February 2018 DC Tours had a surreal, brilliant and energising experience. Word went out on social media and then through private communications that Blindboy Boatclub was looking for ‘Danzo’ up in in Belfast. I was perplexed. What had I done to annoy this cult figure of the podcast world? Was he looking a fair dig and if so why at the Duncairn Arts Centre in north Belfast? Would he bring a team from the New Lodge as back up?

Thankfully it was much more benign. Blindboy and Willie were planning their first live audience podcast recording at the venue and with his love of Twitter he’d appealed to his followers for guest suggestions. DC Tours and myself had reached him through various sources, (thanks you bastards), and with his antennae for the different, he honed in us. Ray Giffen, another Laverys regular in the olden days, phoned and assured me it would all be alright on the night and I was part of a panel. He continued to spoof through his teeth as he concocted said panel.

On the night, straight off a hectic Saturday afternoon tour, I met Mark and we hit the Duncairn Arts Centre. I hadn’t eaten all day and was bricking it a wee bit. We met Ray and were shown to our green room in the old church 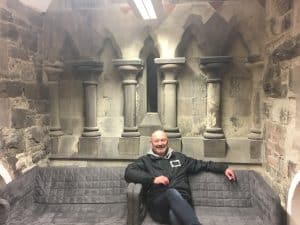 building which is genuinely beautiful. Happily as was my want there was a fridge full of beer. Nervous, tired, empty stomached and having just been informed that of course there was no friggin panel and I was the only guest, beer was the perfect preparation.

Blindboy and Willy arrive. It’s all very down to earth, “alright Blindboy, I’m Donzo, this is Mark.” no thrills or spills. Blindboy and Willy faff about with tech gear, totally rearrange the stage layout in the hall where 300 people will soon pack in and then suggest pizza. With beer.

So I’m sitting with Blindboy Boatclub, who my daughter loves, eating pizza, drinking beer and generally talking shite. It’s brilliant because it’s like talking to a dead on mate in the pub. He’s not wearing his bag over his head and he’s a very handsome chap, lovely eyes. I can think of many who merit wearing a bag over their bake with much more reason, James Ellson included. Mark tells him a dirty story about a Belfast born and raised international mega star (dirty baste) which tickles Blindboy enormously and this helps me. He’s happy to be entertained and not just be the voice and partial face.

He asks a bit about Belfast and the tours but not a huge analytical amount. He says nobody knows anything about Limerick apart from what they’ve read in the media about it being ‘stab city’ back in the 90’s or in Angela’s Ashes. I say I know it had an anti-Jewish pogrom in the early 1900s and a self-declared Soviet in 1919. He says “fuck off!” Never really figured out how to read that.

I know he has twittered asking people for questions to ask me and nearly three hundred have been received. He shows me a print out of them and quickly I can see a number of my so-called friends are hilarious bastards….After a page or so I make a suggestion. He is a free form, spontaneous maverick, I’m a professional gabshite, why doesn’t he just pick them in front of the audience as things go along and see where the ride takes us?

And if you can’t wait for next week you can hear the podcast here: https://play.acast.com/s/blindboy/jockeysporridge