Blindboy: The Gegs and the Legacies (Part Two)

Mark and I are at the back of the impressive Duncairn Arts Centre main hall waiting for Blindboy to come on. The hall is packed with people enjoying the anticipatory ambience and the carry outs of wine, beer and cider they’ve brought. There are people I know there and I’m identifying friendly faces. A former Laverys bar worker (did everybody drink and/or work there?!) chats and seems reassuringly baffled that I’m the stage guest. This detail hasn’t been advertised.

Blindboy does a hilarious intro reading from his new book. He’s preaching to the believers. They love him and the atmosphere is of warmth, shared humour and admiration. It’s like a Trump rally without bile, threats and Covid super spreading. Eventually he calls me “Danzo. Where are ye Danzo?!” I walk through the crowd, black DC Tours polo shirt on, beer in hand and he declares I look like a professional darts player and I feel like a bit of a dick…

The rest is brilliant. The decision to go free form with random questions plucked from the Twitter hundreds is 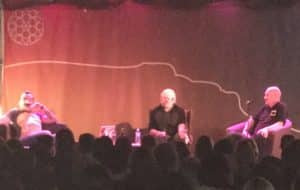 democracy run riot. “What’s the crack with Protestants?” “Why are Nationalist murals good and Prod ones are crap?”, “Was Gerry in the ‘Ra?” Racism, immigration, the ethics of peering in peoples windies in streets with tour groups, it’s a potpourri of weighty issues infused with irreverence and laughter.

The immediate aftermath is a full on buzz. Friends are waxing lyrical and strangers are complimentary and chatty. Ray Griffen, Duncairn’s Creative Director is delighted as is Blindboy himself and he references this in comments in later podcasts.

DC Tours benefited hugely from the gig. We developed a new demographic of guest, “are you Blindboyers?” is regularly asked of our guests when we meet for a tour.  An unfortunate legacy of this terminology was when it was asked to a guest who actually was blind and hadn’t fully extended his white stick, but he saw the funny side.

People showed up at city hall who had heard it in Australia, Vietnam, Boston, Germany and even a bus driver from the Bogside who did it on his break before driving the ‘Maiden City Flyer’ back up the Glenshane Pass. In Castle Lane a UUJ student interrupted me politely as I walked with a group. He was listening to the podcast on his headphones as he walked past and saw the logo on my jacket. He was delighted, the group were delighted and for thirty seconds Castle Lane was a little oasis of beaming locals and visitors.

Here’s a serious discussion though. Blindboy’s podcasts have up to a million listeners per month. He has a huge range. Despite the surreal irreverence and colourful language he’s viewed as a serious commentator particularly on mental health issues, suicide and masculine identity and he has clout. This and the challenges of how you deal ethically with the issues within conflict tourism actually underpin the podcast with a subtle but real brevity.

Sometime later I was browsing the Slugger O’Toole blog when I discovered a piece by Claire Mitchell, a former senior sociology lecturer at QUB, author and editorial board member at Slugger. In her top ten podcasts of the year she wrote this:

“The first one with Donzo aka Paul Donnelly of Dead Centre Tours is excellent…a down to Earth Protestant  ..sometimes cuts to the chase, sometimes delicately manoeuvres his way around awkward political question, for what I assume is a largely Catholic audience.”

She holds it up as an example of difficult conversations that we need to have and can do so successfully. I’ll take that all day long thanks.

Since then Blindboy has interviewed Cillian Murphy, Bernadette McAliskey and Spike Lee amongst others. I don’t want to be brash or vainglorious but I feel DC Tours provided an unexpected but positive foundation for the ventures of Blindboy and Willie, not ignoring their own incredible talent and approaches. They, of course, assisted us hugely.

So thank you Blindboy and The Rubber Bandits,  Ray Griffen, Bill Shaw and the Duncairn Arts Centre and our mate Drew from Laverys middle bar who threw our name up on Twitter first as a worthy Belfast phenomena. Youse are sound as.

One last thing, Blindboy said we’d meet again and collaborate on another adventure. We look forward to it mucker!

And here’s the podcast in all its glory… https://play.acast.com/s/blindboy/jockeysporridge