Lazing On A Sunday Afternoon

If you’ve read my blogs before, you’ll be fed up hearing that I hail from the Holylands area of South Belfast and grew up in the 70s and 80s. I’m totally guilty of wallowing in the warm nostalgia of the era; the toys, the TV shows, the music and of course, the gorgeous Lynda Carter.

However, if I’m honest and remove my rose-coloured spectacles, it was mostly shite. Belfast was pretty grey at that time, run down and in some parts, blown up. The fear and hatred on the streets was tangible.

Despite living in a mixed area that hadn’t as yet gained the reputation of a student version of a level of Dante’s Inferno, as it was pointed out to me recently by Spud, my fellow Rugby Avenue resident, the area had seen its fair

share of violence and murder. Whereas my Mum had witnessed the murder of a local Catholic guy who had five kids just round the corner from our house, I was quite simply oblivious to the danger. Maybe all kids who grew up in Northern Ireland at the time were?

Anyway, I didn’t care about the danger; I was more concerned about the boredom. The scene from the Young Ones where Vyvyan goes on about being bored before hitting Rick with a cricket bat, several times… THAT level of boredom.

Now that I think about it, in fairness we weren’t allowed to go too far from the house because our parents were protecting us from the dangers associated with the Troubles. This parental worry included having my bag knocked in by the nearby “PYT” gang. At that age I thought this initialism meant “pull your tits”, but in fact it was the abbreviated version of the Pass Young Tartans. They were a Bay City Rollers looky-likey sectarian brute squad from Donegall Pass in South Belfast that spawned many a loyalist paramilitary.

The furthest me and my wee sis were permitted to stray by ourselves was Botanic Gardens when we got a dog in the early 80s, but up to then our only options for play were A) the house, B) the street outside our house, or C) the back entry behind our house.

The worst day of the week for the grinding boredom was Sunday. In the main we weren’t churchgoers despite the embarrassment of riches when it came to nearby places of worship. The fact that inner Belfast was essentially ringed by churches, like something resembling a war time pincer movement, was the result of the growth of industrial Belfast, with churches of varying hues and grandeur springing up at every turn. But none of this mattered, as we didn’t go anyway.

Options for Sunday were therefore very limited indeed. My favourite nearby shop, Gardners newsagents in Botanic Avenue, only opened for a couple of hours in the morning in order to sell the Sunday papers. However I was in my lazy bed of course, so no comics or a crafty upwards juke at the top shelf mags for me!

Bearing in mind there was absolutely feck all worth watching on the three channel TV on a Sunday morning and this was pre video days, staring at the walls of a small, smoke filled terraced house could drive a skinny wee ballix like me insane. 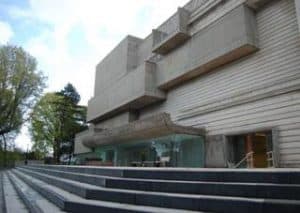 However we were actually pretty lucky, because when all said and done, the one main option in South Belfast on the Sabbath was the old faithful; the Ulster Museum. It was a five-minute walk away and free. To say we were regulars is an understatement and I never got bored of it.

Whether it was Takabuti the Egyptian mummy lying resplendent in her sarcophagus, Peter the Polar Bear, Marjorie the Coelacanth fish, the multi coloured clicky buttons of the Irish geological display, or the gold trinkets of the ill-fated Girona, I lapped it up. Mind you, the huge vertical water wheel that was part of the industrial history display didn’t have much to prevent a wee scallywag like me from falling in. I always feared I would end up like that German soldier in the Eagle Has Landed, being dragged round as the monster wheel rotated. 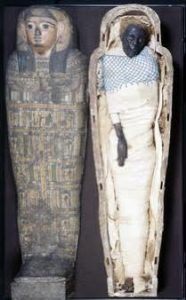 Despite the building being a mish mash of the old and the new and the carpet causing those terrifying static electricity sparks to come out of your finger when you touched anything, we kept coming back each Sunday. The café was great too, making it the best (or only?) show in town for a lazy Sunday afternoon. After that it was home for traditional Sunday dinner of Fray Bentos pie, oven chips and Bigga peas. Yum!

The museum is even better now and I still love to pay a visit when I’m back in my old stomping ground. If you haven’t been yet, please go along to experience its wonders and say hello to Takabuti for me!