Everyone’s name has meaning, sometimes hidden, sometimes not, and in Northern Ireland it can also be used to categorise us, whether we want to be or not.  And a question guests often ask on our tours is ‘what does the ‘D.C.’ in our name stand for’?

Those of you with clear memories who have been with us since our first tentative steps in 2013 will remember that it was always ‘Dead Centre Tours” at the start. Since a review of our marketing profile a few years ago ‘D.C.’ has become the everyday moniker. Neater, snappier and perhaps a little less uncomfortable for some….

Before going public in 2013 we painstakingly examined, tested and reviewed every aspect of what it was we were intending to do. Given the extremely sensitive nature of our subject matter, the tour’s stops at the sites of painful events and being immersed everyday amongst a population carrying the lived experience and memory, we strived for balance, empathy and subtlety in our presentation of our troubled past. This was particularly true of our name as this is people’s first interaction and impression of who we are and what we do.

Interestingly, numerous people, both locals and visitors, had already engaged in a thought process with varying degrees of insight and accuracy. Simple logistics identified the dead centre of Belfast as being in the area of the city hall and Donegall Place where the tour starts. This was also underpinned by most of the other political and conflict tours concentrating on west Belfast which is still the case today.  To a certain extent this may have been an influence upon us, but it wasn’t the primary one.

We always start our tours with a quick introduction to 800 years of Irish history right up to how and why the Troubles began, together with insights into our philosophy and methodology.  When guests understand that we don’t advocate any one political position or community perspective but instead presenting as many on our paradigm as possible, some saw the Dead Centre as referring to a position of super-neutrality. Certainly I get that, but I really don’t believe that is possible here. Even saying you are in the centre is a political position that isn’t value free or without prejudice in Northern Ireland.

Ultimately the reason is this. Our chronology of events is about the lived experience within the city centre from the city hall to Oxford Street, crossing Donegall Place, Castle Lane, Arthur Square and the Cornmarket via Donegal Street and through what is now the Cathedral Quarter to the Waterfront.

From 1971 to the 1990’s the area was systematically bombed and numerous people, mostly civilians, also died in gun attacks. As a

consequence, the security feature known to us as the ‘Ring of Steel’ came into being from the 18th July 1972. The steel walkways and checkpoints where we were searched and frisked usually by civilian staff and accompanying police and army along with the vehicle checks and restricted driver access, became a central feature of our everyday cityscape until 1995.

Whilst the city centre streets remained busy by day, the phased lockdown of the 18 security gates from 6pm each evening slowly strangled most of the nightlife within it, forcing the bars, restaurants, hotels and cinemas to either shut down or move out of the centre, and creating a dead centre which only awoke the following morning.

Everyday civilian activity, from going to work to shopping for your kids’ clothes was undertaken in a totally militarised zone. What is also abnormal was how quickly we became used to it. Essentially the abnormal became the norm.

Ceasefires, security reviews, normalisation and the Good Friday Agreement ebbed, flowed and overlapped and today we have a city centre which has regenerated considerably from what it was even twenty years ago. However, many of you know, and our visitors definitely notice, that to this day in most of the streets cited above the shops still close from around five each evening.

On one of my earliest tours a Canadian guest said she had walked through Donegall Place and Cornmarket the night before and the only people about were “punk kids on skateboards and other international visitors looking for something, anything!”

Rewind 50 years and March 1971 saw Led Zeppelin playing a new song, ‘Stairway to Heaven’ to a live audience in the Ulster Hall for the first time ever. The whole world to choose from and they do it in Belfast. Incredible.

Within 6 months of that gig, our finest hotel, the original Grand Central on Royal Avenue would be forced to shut down due to the 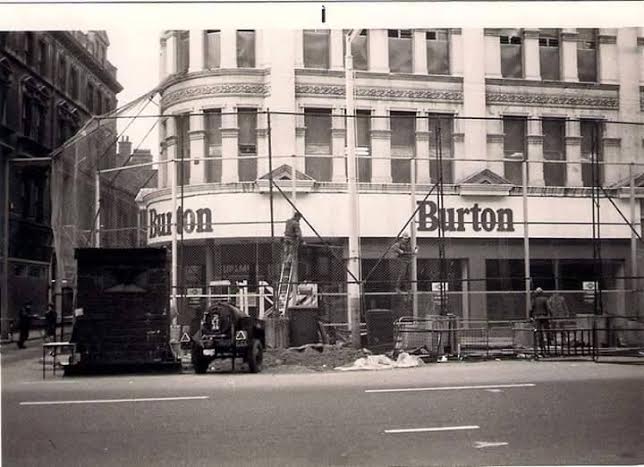 worsening violence, only to become an army barracks, cloaked in anti-rocket mesh with sentry posts on every corner.  That’s pretty incredible too.

But even today, twenty years after our peace agreement, where is the nightlife that once thrived in the heart of the city?

Put very simply we still have a dead centre in the centre of Belfast. Essentially the events of 1970 onwards created it and despite the military and political changes the behaviours of the past are still evident in the present. We raise and discuss many legacy issues on our tour but this is an incredibly distinct one that isn’t as emotionally raw as the issues for victims and survivors or as visually ‘in your face’ as the peace walls and interfaces, but it is very real.

The resurgence and regeneration of our nightlife in the Cathedral and Linen Quarters is positive and welcome, but the pedestrian precinct at the heart of the city still doesn’t buzz in the evenings as it does in so many cities across Britain and Ireland or as it did in the swinging sixties.  We still have a dead centre. We are a work in progress.