Cliftonville versus Glentoran circa late August 1986

The purpose of this post is to illustrate the joy and serenity of sectarian and other violence at football matches in Belfast in the 1980s. Progressive Unionist Party leader Billy Hutchinson, with Gareth Mulvenna, has written of the regular serious violence that occurred as Loyalist Linfield fans walked past Catholic Unity Flats in the early 1970s. And Henry McDonald has written of his experiences of violence at the footie as a follower of predominantly Catholic supported Cliftonville in the late seventies and early eighties.

As a Glentoran man I feel our voice and experience must be heard. Plus the other two clubs are gabshites.

Early season, probably late August 1986. Glentoran were away to Cliftonville at their North Belfast ground Solitude. It was so called as it was often a lonely terrain where smokers could walk  50 feet to get a light from the nearest spectator. Until the late 60s/early 70s, most of 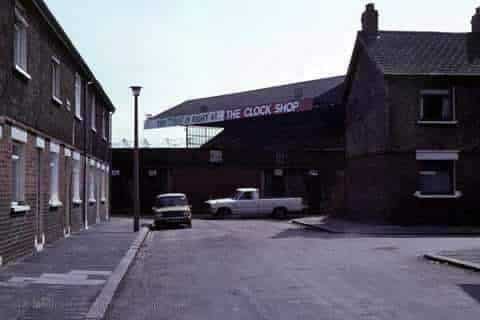 the streets around Solitude had been mainly Protestant. However the convulsive violence that engulfed our communities saw the area become mainly Catholic within a decade.

Thus Cliftonville’s support reflected the changed demographics. Irish tricolours along with the green and white of Glasgow Celtic mingled with the clubs traditional red and white.

For the benefit of our overseas viewers, Glentoran play in a fetching green, red and black ensemble. Most of them come from the predominantly Protestant communities of east Belfast. Linfield viewed themselves as the Loyalist elite and are known as “The Blues” with red, white and blue their colours. Sometimes a fleck of yellow can be seen on the back too.

I was seventeen, my brother thirteen. We missed the traditional police armoured vehicle escort of the Glen men from Nabneys furniture shop in east Belfast but continued on foot ourselves. The journey became a microcosmic epic of a violently divided city, with additional divisions within divisions.

Within ten minutes we were outnumbered and attacked at the interface between the bottom of the Loyalist Newtownards Road by four young men from the Republican Short Strand. They hurled bottles and advanced on us whilst denouncing the 1920 Government of Ireland Act, the Williamite settlement and the fallacy of building a church upon the phallus of Henry the Eighth. It was becoming politically, theologically and physically uncomfortable.

Lifting two landed missiles and retorting “we need dialogue and shared civic space!” (or something), I charged across the no man’s land at them. They split instantly back into their own streets. My brother, who was meant to be the Loyalist militant was, by his own Lutheran confession, “shitting it.”

Where the Queen Elizabeth Bridge crosses the River Lagan and enters the city centre’s Ann Street a group of slightly older guys lingered. “You going to the Glens match lads?”, they asked. “Aye mate. We just got bricked at the Strand!”

And of course, they were Blue 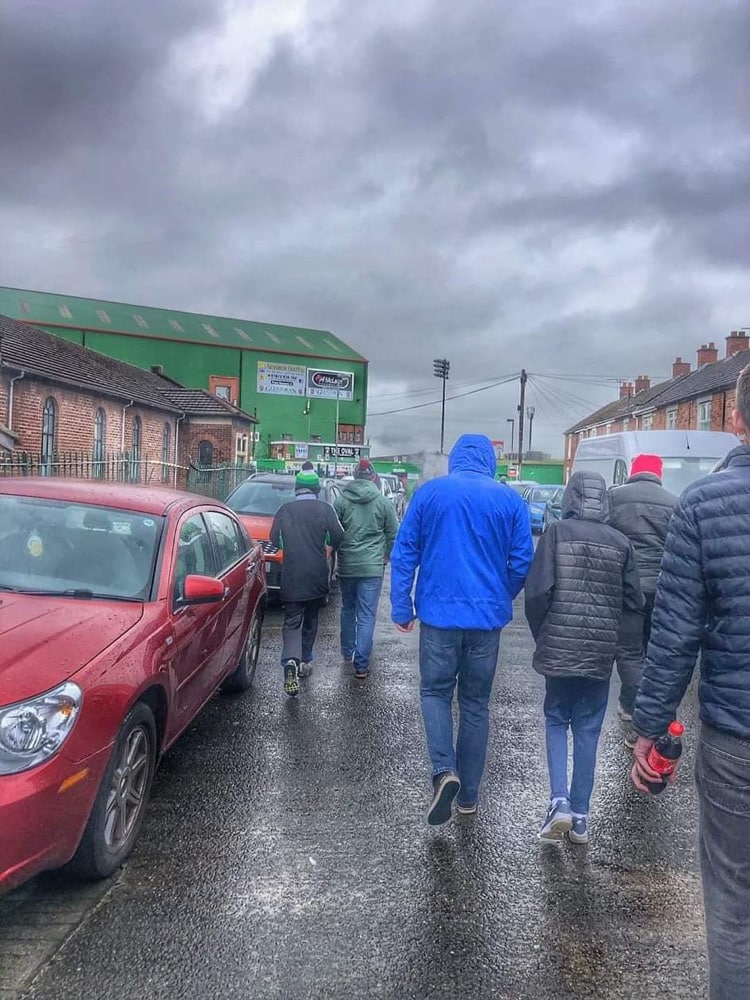 men waiting to pincer movement straggling Glen men. The vagaries of intra Protestant football hatreds are a mystery to many but believe me, they are real and vicious. This made their decision not to knock our melt in all the more amazing. An unusual clemency compared to our experience at the Strand.

The match itself was standard fare. It was sunny, the football varied between the Pele-esque by us and the Sunday pub team farcical by them. I think it ended one each. I do remember a mate tried to set the back of my Mohican on fire.

On our journey home we were now escorted by armoured police wagons with flashing blue siren lights. We crossed the interface on Clifton Park Avenue, with the observation posts of Girdwood army barracks running behind the arterial houses.

Out of the sunny sky missiles suddenly rained down upon us. A cabal of Catholic youths had taken position in the upper floors of derelict houses just before you entered the Protestant territory. Then we discovered that a number of unscarved lads amongst us were actually rival Prod Linfield fans! There was a brief flurry of slapping before the RUC rerouted them (it was becoming all the rage then) away from us and towards the Shankill.

Could this day get any better? Of course, it could. At Carlisle Circus road junction several army jeeps were lingering. One of my mates, 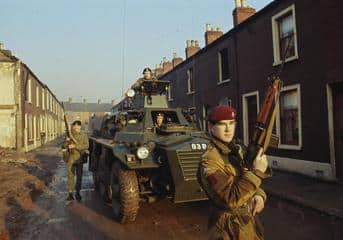 let’s call him Dinger because that’s his name, enthused by a bottle of QC sherry and a devil may care attitude, started singing the popular Stan Ridgway song ‘Camouflage’ to the soldiers.

To our surprise they took umbrage and started towards Dinger with guns pointed. His plaintive cry of “What the fuck?! We’re Prods!” brought a quick détente. There were more ructions in the city centre with Linfield fans from Rathcoole starting in the Wimpy Burger Bar and spreading to the grounds of the City Hall.

Eventually we made it back to the East side of the city. I remember getting into the house, hair singed, sunburned, nerves frayed but also exhilarated.

My ma asked “Well, how was the match?”