My Favourite Book About The Troubles

Naturally, our guests ask for recommended books about the Troubles and to a lesser extent films and documentaries. We, of course, have a comprehensive reading list of fact and fiction titles which has evolved over the years and will continue to do so. Recently I was challenged to name my ‘favourite’ read about Belfast and its recent troubled past. It sounds like a tough ask but after only a few minutes I had my answer.

Very simply it is The Crack: A Belfast Year by Sally Belfrage.

While many people will know ‘Lost Lives’ or more recently ‘Say Nothing’ by Patrick Radden Keefe I’ll bet very few here, local and beyond, will have heard of ‘The Crack’ and more’s the pity. Here is why…

American Belfrage had lived in England for decades before spending a year in Belfast in what I work out as 1985/86, although 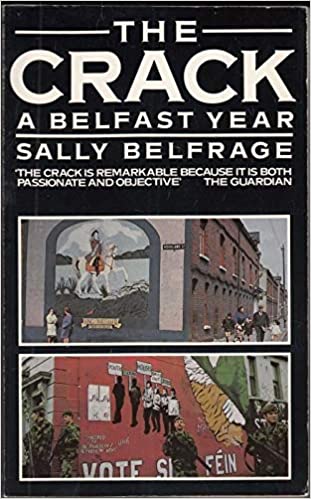 interestingly she does not explicitly date her time here. Her American background coupled with living in England for so long prompts one Belfast friend to suggest it’s time she sorted her accent out. Very simply what she does is to come here and meet people, and as relationships develop she often spends time living with them and their families.

Thus she moves around the city staying in people’s homes from Andersonstown to Ballybeen. I would like to say she does this effortlessly but sometimes it’s not quite that easy, as one incident with Mary McMahon of the Workers Party, who lives in a freezing maisonette in Turf Lodge illustrates. Belfrage describes retiring to bed with a “blotted copybook” after a heated altercation with McMahon when Mary declares she’ll not be interrogated in her own home.

Over sixteen chapters Belfrage, aided by a glossary and appendix of events, outlines the big history and big politics but it is infused with the texture of people’s homes, communities and ultimately their everyday lives. This makes it incredibly rich and insightful in a way that most of our weighty and important tomes do not, nor claim to attempt.

Chapters entitled “Is there life before death?” (graffiti which could have been anywhere) “Flags for Breakfast”, “Papa Doc and Politicking” through to “Republicans in an English Court” and “The Glorious Twelfth” tell you it’s not going to be a conventional ‘troubles’ book but it won’t ignore anything either.

What I love is the mundanity mixed with chaos of life. The observations of Belfast cuisine in the eighties as a working-class Belfast Loyalist woman at her own cost buys them steak as a treat, then fries the arse out it for what seems like hours, or the massive vocabulary to describe being drunk and of course the humour in the darkest times.

One example is the graffiti in response to the supergrass trials of the early eighties when INLA man Harry Kirkpatrick turns on former comrades – “Thank God I wasn’t at Harry’s wedding” appeared on a few walls as most of his wedding guests would later end up in Crumlin Road Gaol on his testimony.

Which brings us to the issues…There are issues today that many of us have probably faded memories of, such as the supergrass trials. Belfrage spends time with a Loyalist woman Caroline Newell who is campaigning against the process. Discussions and arguments range from the ethics of the use of plastic bullets to the principle of power-sharing (remember that was an argument for three whole decades?)

Names arise such as Andy Tyrie, the then supreme commander of the UDA whom she interviews and is impressed by his jovial and relaxed manner as he waxes lyrical about his passion for gardening. Later she says he threatened her off-tape several times but it was so subtle she didn’t realise at the time.

She talks of the Official Unionist Party, Official! Remember them? That’s the Ulster Unionist Party in today’s world, simply ‘The Unionist Party’ from 1921 -1972 as they governed Northern Ireland for fifty years unbroken. Today they have two councillors in Belfast.  It’s extraordinary what has changed and of course what hasn’t.

There are moments of total human experience such as the Republican ex-prisoner who sits stunned in his home just endlessly smiling when Tyrone man Dennis Taylor defeats Londoner Steve Davis in the 1985 world snooker final. Taylor was later welcomed with rapture in Loyalist clubs on the Shankill. 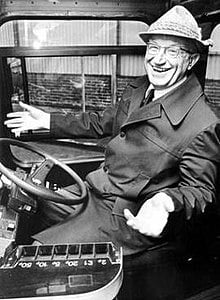 And tales of Werner Heubeck, the mad but determined German transport manager, who seemed to carry a live bomb off one of his beloved Belfast buses every other week?

It’s that minutiae of detail, the rich weave of colour arising from the mundane in a huge complex and sometimes dark tapestry and the ghosts of life between the Hunger Strikes and The Anglo-Irish Agreement that have made me return to this book many times.

This wasn’t intended to be a school book review but if it was I’d be saying “I really enjoyed this book and give it an eight of ten”.

P.S. for our American readers, it was published in the U.S as ‘Living with War: A Belfast Diary.’