For the handful of you that have read my previous blog about going to Leisureworld every Saturday in the 70s and 80s, as well as my unrequited love for Lynda Carter, you will know I grew up in the Holylands in South Belfast during the height of the Troubles. Even back in the day it was a fairly mixed area, the hinterland of my alma mater Queen’s University. It was not known for being a hotspot of violence.

As I always say at the start of the History of Terror tour, I truly believe I had a normal upbringing (just to be clear, I’m not saying I AM normal) despite living pretty close to the sectarian interface of Lower Ormeau/Donegall Pass, and within a mile of the regularly bombed city centre.

Something I am eternally grateful for is that family was never physically harmed as a result of the Troubles. However, whilst we didn’t lose a loved one to the men of violence, it certainly touched our lives.

In a recent episode of the excellent Shrapnel podcast, our chief guide Donzo relates that telling the stories of terrible events during the tour still catches his throat on occasions, proving that we are very human. I feel this way at the start of each tour when I mention the fact my Mum witnessed a sectarian killing in our street….

William McAteer, was a lorry driver, a Catholic and just 40 years old when he was gunned down by a UVF gang in February 1980. He had 5 kids and was from nearby Rutland Street. He was walking along Rugby Avenue with a friend when he was killed at the junction of Jerusalem Street. My Mum and her chum Eva were standing a few yards away and saw it all. He had no connection with any paramilitary or state organisation and didn’t stand a chance. 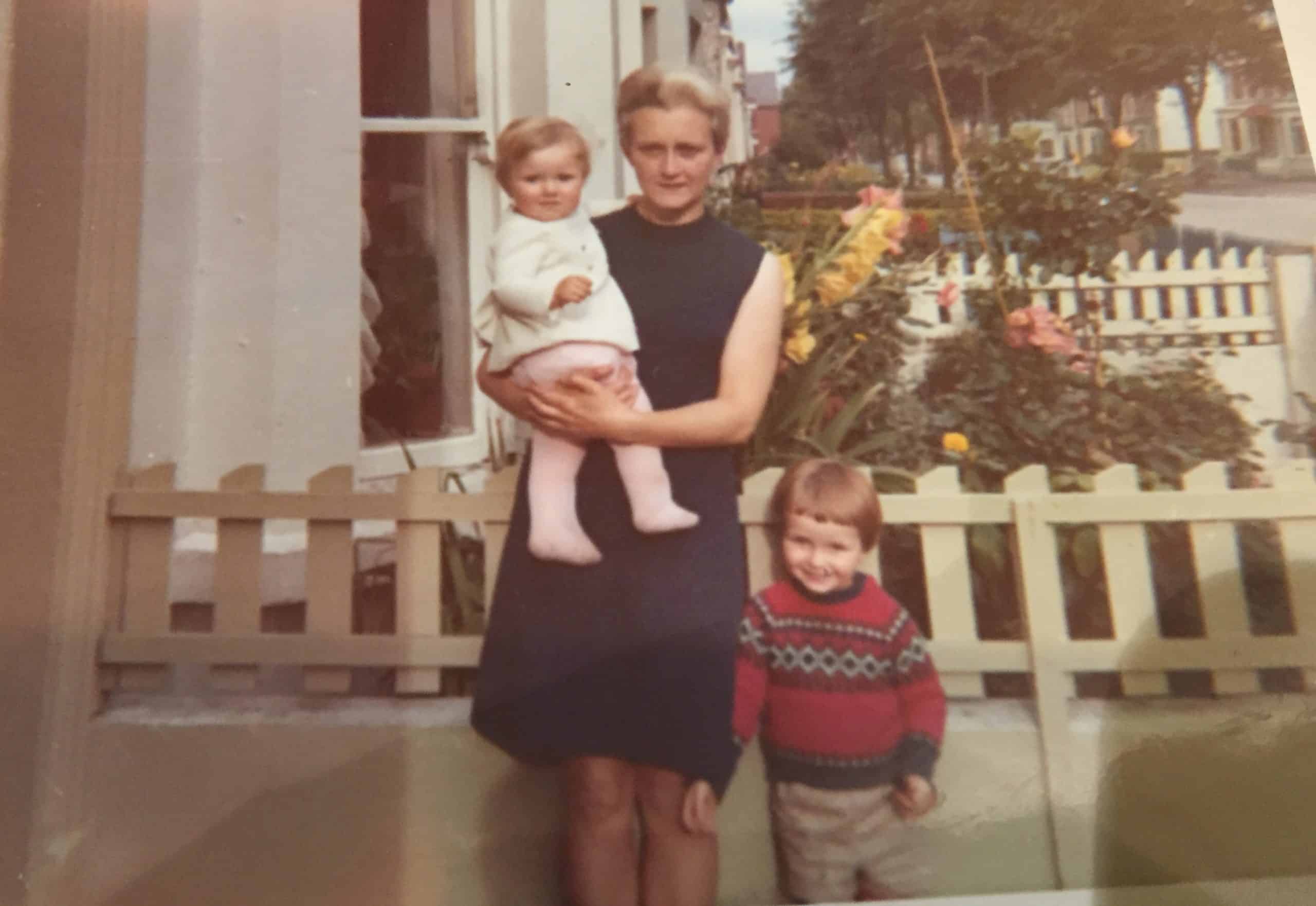 I remember that day vividly. I was watching the Dick Emery show on the telly when Mum staggered into the room, white as a sheet, almost fainting. I hadn’t heard a thing over the noise of the TV. What I regret to this day is that I never asked her how she felt; actually I don’t recall us ever speaking about it again. The sad fact is that this is how our society dealt with the horror of the Troubles, or more accurately; how we didn’t deal with it.

The next morning I went with a pal to the murder scene just a short distance from our house. Walls and windows were peppered with bullet holes, blood remained on the roadway. The crime scene tape was gone and it was all very quiet, very surreal.

Up until quite recently I would have said that was the only violent incident that affected our family, then I got chatting on Messenger with Spud, an old neighbour of ours, comparing notes on our Troubles experience. It turns out there’s quite a list….

I was four years old on 21st July 1972, a day that has gone down in infamy as Bloody Friday. I recall we were walking towards Botanic Avenue with my Mum and wee sister who was in her pushchair. Large bangs were going off in the distance and without explanation my mum turned us all around and we headed home. She knew something very bad indeed was happening, we remained blissfully oblivious. Botanic Avenue was of course a target for an IRA bomb that day, If Mum hadn’t turned back we could easily have walked into the middle of a car bombing.

Less than 2 years later, in May 1974 five Catholic patrons were killed in the Rose and Crown bar on the Ormeau Road near the bottom of our street. The UVF lobbed a large home made bomb into the premises, which detonated immediately, bringing the front of the building down. My Dad used to drink in the Rose and Crown. I feel a sense of shame that I hadn’t heard of this attack until quite recently. I can only assume our parents protected us from such horrific incidents given the proximity to our home.

In the early 70s I remember asking my Dad why he had placed a criss-cross pattern of Sellotape over our bedroom window, like something I’d seen on the windows in episodes of ‘Dad’s Army’. He came out with some auld ballix that it was an efficient way to keep the heat in, little did I know at the time it was to minimise flying glass in the event of an explosion.

This all become real when the Provos, for reasons best known to themselves, blew up the nearby Ormeau Gasworks in October 1976. I was looking out the window at the time and recall the sky turning deep red in an instant. The Sellotaped window withstood the subsequent shock wave, thus saving me from being cut to ribbons. Thanks Dad. I later found out that three IRA members had been killed in this premature explosion, ironically one of the dead was their explosives training officer, a former British soldier.

16 year old Michael McCartan was shot dead by a police officer close to the Ormeau Bridge in July 1980. Michael had been painting graffiti at 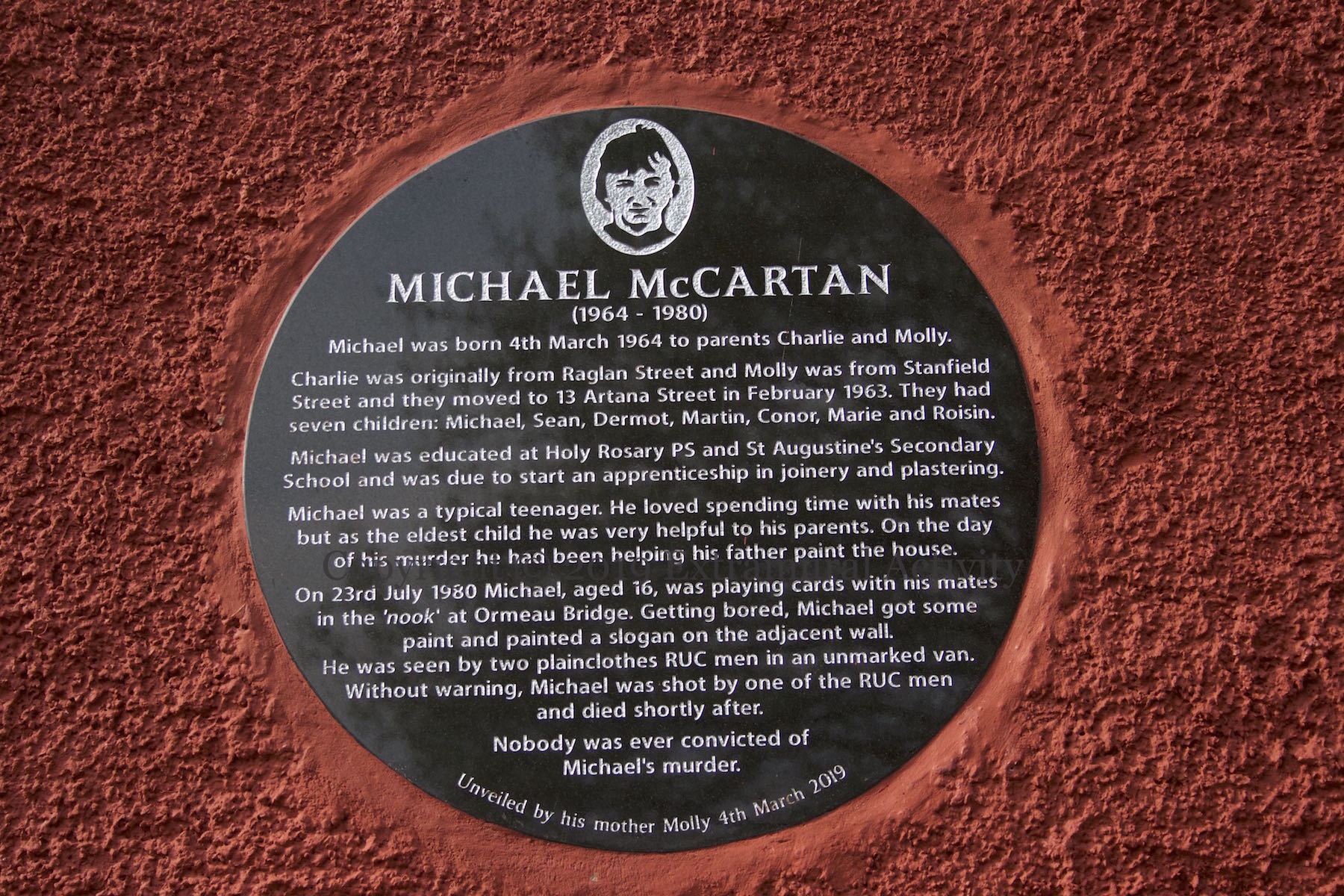 the time, a not-unusual pastime for youths then and now. The officer responsible for his death stated he thought the paintbrush Michael was holding was a gun and he fired a single shot. The Constable was charged with murder, but acquitted at the subsequent trial. Even though he was only a couple of years older then me, I didn’t know Michael, but my mum was friendly with his mum Molly. I also remember walking along the lower Ormeau Road en route to the Curzon cinema on the day of his funeral. Thousands lined the road and RUC officers were positioned nearby; the tension was palpable.

In April 1984 another UVF bomb took the life of Catholic grandmother Peggy Whyte in University Street, a couple of streets along from where we lived. Her family had suffered years of abuse from loyalists and soldiers from the UDR. Peggy’s son Jude campaigns on behalf of victims of the Troubles to this day.

23 year old Constable Michael Dawson died alongside her. This young RUC officer was one of the first responders to the bomb warning and was helping to evacuate the area. 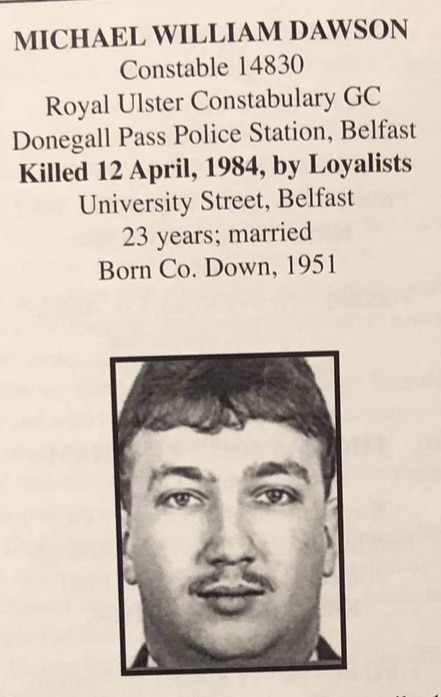 Loyalists may not have deliberately targeted the RUC in the way republicans did, but it wasn’t unusual for the UVF to kill police officers. The first policewoman to be killed in the Troubles was Mildred Harrison, killed by a UVF bomb on Bangor High Street in March 1975, while the very first RUC man to die in the Troubles was Constable Victor Arbuckle, shot by loyalists in October 1969 on the Shankill Road, during protests against government plans to reform the RUC. Isn’t it ironic?

There are numerous other incidents that I discussed with Spud, but there’s no room to include them all. Maybe I’ll write a second blog sometime.

On a (comparatively) lighter note; in the 70s and early 80s my mum worked in CSC Electrix on the Ormeau Road, a protestant-owned electrical goods store that was subject to numerous bomb attacks by the Provos. Emulating Citybus supremo of the time Werner Heubeck, the CSC owner regularly carried bombs out of his shop, placing them on the roadway so the Army could deal them with. He finally stopped doing this when an Army bomb disposal officer told him one of the devices had been booby-trapped with the intent of killing him when he tried to lift it. On that occasion the anti-handling mechanism hadn’t worked and he lived to tell the tale. Lesson learned and as with so many, a very close escape.

They’re long gone now, but I’d like to thank my mum and dad for keeping us safe throughout this troubled era. As for my own kids, they neither know nor care about the troubles we saw and I’m glad to say have never experienced anything of that nature. Long may it continue. 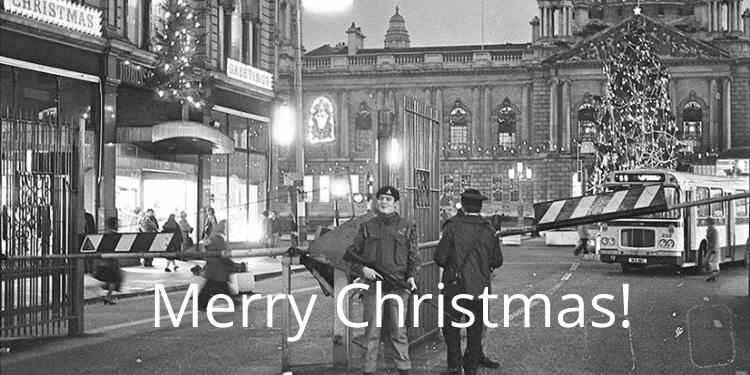