When Mark messaged me on Facebook in late 2012 to say “I have a business idea, give me a call you knob!” I’m sure neither of us envisaged that by 2021 we would have become a multi award winning entity with friends and followers around the globe.

Back in the dark days of Spring 2013 and within weeks of launching the tour we were attacked by a local journalist in her weekly newspaper column (who couldn’t even be arsed to go on the tour before writing about it), grilled on BBC’s Talkback and kept within an administrative cordon sanitaire by the municipal authorities and tourism bodies.

Nobody could have imagined we’d be pipping the Harry Potter Tour by a place in Trip Advisor’s Top 5 UK Tourist Experiences in 2019. From the Tour that could not be mentioned a la Voldemort to outpolling the Boy who would not die, it’s been quite a journey.

Whilst all that is lovely and very satisfying we have also in this period of reflection been…reflecting. Recently I did a thirty minute telephone interview with a journalist as part of a Tourism Northern Ireland campaign to “Embrace Our Giant Spirit” which tapped into something we had been vaguely aware of but hadn’t quite processed.

Over the years DC Tours have created so many new relationships, new projects and energies that we never anticipated. We have always stressed to our guests that we are only an email away after a tour to further engage if they wish, be it an unasked question from the day, clarification of a point or scenario, through to recommended reading and viewing. Now we are realising it has been bigger than that.

Here are a few examples. – Rudi the Dutch punk who came to town to see Stiff Little Fingers at Custom House Square on a Saturday night very commendably takes our Sunday morning tour. He is delighted that we cover the Harp bar 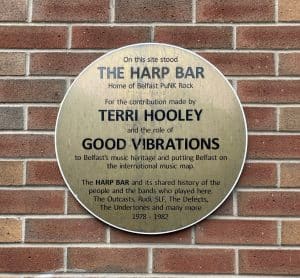 and the Belfast punk scene as an important feature in a bigger context. So his name is inadvertently on the commemorative plaque in Hill Street as he shares it with one of our finest punk bands. He’s loving it and he now returns regularly for SLF gigs and our tours, bringing with him an ever-increasing entourage of Dutch punks and lots of CDs for us from the Dutch punk and dance scenes.

Or the American writer who steps off a cruise ship for the day with her son, joins up with us for a tour.  Thanks to the connection we made she has now returned to Belfast four times, has developed a whole network of friendships across the city and is now a very good personal friend of mine.  – She’s currently writing and developing a musical drama about Belfast in the conflict. Some of our help and advice has come from an SLF member, a senior US politician who was here in 1998 and knows a fair bit about the Good Friday Agreement and has cast an eye over it, and a number of ordinary Belfast men and women. Marvellous!

Amongst our other favourites are the numerous people who have toured and used the experience and knowledge gained to assist their academic research or in one case, totally change their thesis subject to examine issues in interface communities.  We collaborated and designed a survey and questionnaire and with help from Belfast Interface Projects membership groups received an incredible response. The young student emerged with a First for her dissertation.

I could go on a name and office dropping frenzy though modesty forbids me.  But I will allude to international experts on conflict and genocide who have gifted me their books, former Government ministers and members of the European parliament, the Bundestag, a United Nations group from the Federally Administered Tribal Regions of Pakistan, a former local party leader, trade unionists, Croats and Serbs together….it goes on and on.

I’m not saying we’ve changed the world but we have positively influenced people’s engagement with our city, stories and experiences and made lasting connections and friendships in a way which was unimaginable to us when we set out on this path.  And that makes us happy!