One of the main things we do on our tours is emphasise the positive changes that have taken place since the ceasefires of 1994 and the Good Friday Agreement 1998, but we are also realists and so our guests also hear how Belfast remains a conflicted city in a conflicted society.

On several occasions this has been evidenced by the politics of protest and counter-protest playing out on the civic space of the city centre.

The primary issue of protest followed the Belfast City Council vote on 3rd December 2012 to no longer fly the Union flag (Jack) on City Hall every day of the year as it had been since 1921, above the city hall. This was to change to a designated days policy covering just eighteen days such as the Queen’s birthday and Saint Patrick’s Day.  (Since 2018 it’s only been 17 days as Europe Day got scrapped thanks to Brexit!)

Unionist opposition was universal to the new restrictions and large protest gatherings and marches immediately ensued with the city hall as the natural focal point. With the newly launched DC Tours daily tour leaving the city hall gates at Donegall Square North we found ourselves in the eye of the storm of the Saturday protest. 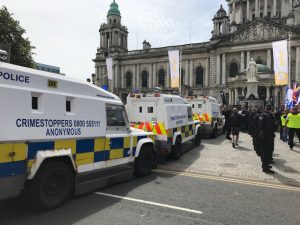 facing any serious health and safety issues to be honest. However in our early days of hoping for walk-up guests on the day, before we became a slick online pre-booking machine, mass protests with an armoured and armed police presence really didn’t help us.

The flags protest still had a significant impact on city centre even after February 2014 when the protests were scaled down and participant numbers lessened. Who remembers the business communities response, particularly in support of the restaurant sector with Snow Patrol “Take Back This City Tonight” featuring? Arguably different groups felt they were trying to take back ‘their’ city in different ways with different visions…

Here at DC Tours we are tenacious bastards and we ploughed on regardless. We were never negligent about the wellbeing of our guests but working to walk with them whilst being aware of their welfare. It’s a metaphor for the bigger picture in some regards.

Over time the weekly Saturday protest from noon to 2pm has become another part of the mosaic of Belfast city centre life. A core group of around twenty-five protesters assemble each week with an array of flags and banners and a small but significant PSNI presence. The atmosphere has changed and the same faces are present most weeks with a clear 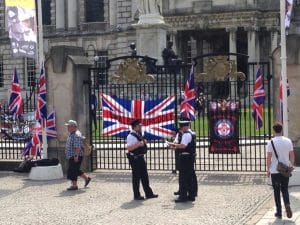 social aspect having developed. Happy birthdays are even sang on occasion! With our guests arriving for a 2pm tour we shared the same space as the protestors and police.

This was never an issue regarding safety or well-being but often immediately had guests asking questions of a meaty nature before we’d even started the actual tour introduction. This was particularly enhanced as the protestors sang ‘God Save The Queen’ at the protest’s conclusion each week.

Was this a problem? Very honestly; no. If you had being paying a props department or gaggle of local actors to create such a welcome it would have cost a brave few bob but this was real Belfast being itself and without intent providing a physical and emotional environment which starkly illustrated why DC Tours were on the street doing and saying what we do. You couldn’t write it to be honest.

You’ll notice this is part one. As I was writing this I remembered a number of other protests that took place in the heart of the city in addition to the flag protests and their impact on DC Tours but more specifically our guests. Thus they’ll form Part Two and just to titillate they’ll include how I was nearly arrested on a Sunday morning as my eight German guests arrived….