As teased at in my last piece there is more to follow on the title theme, and here it is…

We are a city of protesters and no group has a monopoly. Other groups often convene, or attempt to convene, in Belfast city centre aside from the flag protests. An attempted city centre commemorative march and demo by the Republican Anti-Internment League and Loyalist counter protests gave me one of my hairiest and fascinating tour mornings way back in August 2014.

A Republican group (viewed as dissidents) had applied to march from points primarily in North Belfast into the centre and the Parades Commission had restricted the last section of their route. It was evident that counter-protesting Loyalists in smaller groups were also heading into the city centre to stop the Republicans getting in.

There was much speculation about the potential for violence and several city centre streets had temporary but daunting metal structures placed at entrance points to restrict or deny access. These of course had lines of heavily uniformed and armed police officers around them. I once read a description by an English journalist of Belfast constantly having “an electricity of tension” in the seventies and eighties. It was back, crackling, this morning.

As ever I was present, shaven and pristine at the City Hall gates awaiting the arrival of a German group, at around 10.15 am. There was a heavy PSNI presence in the area with police in riot gear, wagons with cameras on the top, and officers with sniffer dogs, lifting water gratings and checking drains and doorways for bombs, both real and hoax.

After several minutes I notice a senior looking officer talking to his personnel and they are clearly glancing in my direction and making an initial assessment of me. I’m confident they are unlikely to be thinking “here’s the peace corps of the United Nations.” Stereotyping is an inexact science and unfortunately, I arguably fit some people’s stereotype of a paramilitary. Including the view of these officers.

Two make their way over. This is roughly the ensuing dialogue; 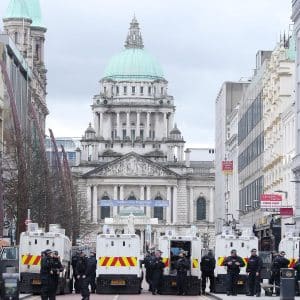 “What exactly are we doing Sir?”

“Ah, what people? There’s a lot of people trying to meet here this morning.”

“Ah, not those people. I’m an historical tour guide waiting on some German visitors.”

Of course they ask what sort of historical tour is it?

Did I bluff and say Titanic, Geordie Best, the City Hall, Frank Carson, soda bread and Ruby Murray’s top ten hits of the 1950s? I did my arse. As a result of this charming but daft honesty I was taken to one side and ‘P’ checked over the radio. Name, address, Date of Birth etc. And then the morning takes a bizarre and worrying twist….

“So you’re just back from England after a year Sir?”

“Absolutely not me Guv!”

A quick review shows they have the year of my birth wrong and are mistaking me for somebody of similar name, appearance and a year younger. I often wonder what became of him…

And of course, my group of German tourists have turned up in the midst of all this. They have a description of me in their pre-tour information; appearance, clothing, location, – they know I’m their guide but I’m being questioned with a radio conversation accompanying it by heavily armed officers in a heavily militarised city centre.

Oh how we laughed when I was released from my questioning, approaching them with a hearty “Guten morgen and welcome to Belfast!” After that it was all a breeze.