Where Can You Eat After the Tour?

So you’ve spent a couple of hours nourishing your brain on one of our tours, taking in the sights and the history, but where can you sate your hunger afterwards?

We’re regularly asked for recommendations for where to eat or get a pint, so I thought it was about time we listed some of our favourite haunts close to the end of our ‘A History of Terror’ tour for a tasty lunch.

Some of these places are cheap as chips, others could leave you penniless, but they are all worthy of inclusion!

The Garrick Bar – if you’re heading back to city hall after the tour you’ll be passing The Garrick and it would be a crime not to call in. 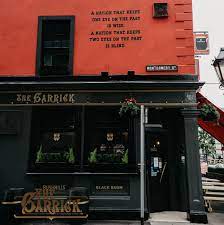 A characterful and traditional Belfast pub, it is a regular haunt for our guides at the end of their day as it does one of the best pints of Guinness in Belfast, but their pub menu and extensive range of beers and ciders is also top notch. Their burgers are quite possibly the best in town and their Sausages & Champ is fan-xxxxxx-tastic!

Ox – without doubt the closest (and coolest) restaurant to the Beacon of Hope on Oxford Street, but also one of the most expensive in Belfast. It’s a Michelin-starred culinary experience to remember – some say they have the best tasting menu in Ireland, albeit one that will leave your wallet considerably lighter. If you’re on a business trip and can stick it on expenses go for it!

The Barge – Also right beside the end of the tour, the Barge is the only floating café in the city with a great range of scones, traybakes (!) and sausage rolls to warm you up after a tour, and it’s dog-friendly too, which makes it even better! It’s also an arts and heritage centre, with a permanent exhibition “The Greatest Story Never Told”, which tells the stories of the industries of the river lagan and the men and women who worked along it, and it hosts regular gigs and events too.

Fish City – There are two excellent fish restaurants in the city centre, – Fish City and Mourne Seafood. These guys are the closest though and have been winning awards since they opened, thanks to being entirely focused on delivering fantastic food in a sustainable style. Their scampi!!! – Nom.

Bootleggers – OK, so it’s a bit of a young crowd, but this ‘American Prohibition-era’ themed gaff does the best artery clogging hotdogs

in town. If you’re under 30 with coloured hair and multiple piercings you’ll probably love it.  I wouldn’t be surprised if the staff did a tiktok dance every hour on the hour. Even this would be tolerable for their hotdogs. Seriously.

Buba – this Lebanese themed restaurant in St. Anne’s Square is simply awesome. We love this place.  It’s owned and run by the legendary chef that is Tony O’Neill and his lovely wife Andrea. And their food is amazing. There’s a fantastic vegan menu too and the cocktails will put a proper smile on your face.  Everyone that I’ve ever sent to Buba has said it’s simply brilliant. Just go.

Common Market – just round the corner from Buba in an old fruit and veg market is one of the latest additions to our street food scene, the Common Market. It’s only open from Thursday to Sunday, but if you’re here on those days it’s well worth checking out. 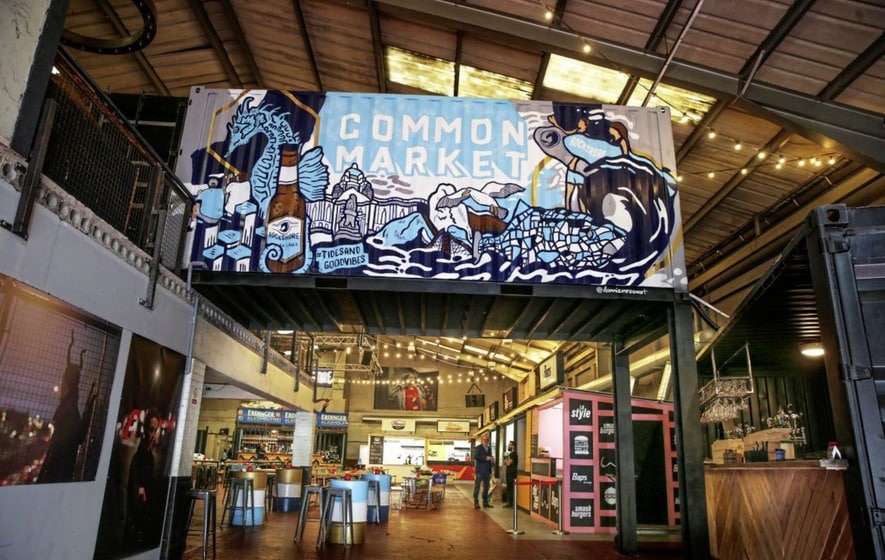 There’s 8 food stalls with a great range from Bao Buns and Mexican to Poutine and Gelato, and 3 great bars with beers, wines and cocktails, so even if you’re in a large group there’s certain to be something for everyone. Vegans, vegetarians are catered for as well as a wide range of gluten-free options, and it’s another dog friendly venue!

The Duke of York – another proper Belfast pub, and one with a lot of history. You’ll have already seen it on the tour, located in Commercial Court. One of the few bars that stayed open in the city centre right through the Troubles and still trading to this day. The room above the pub is reputed to have been the home of Tom Boyce’s Boxing Saloon, the first boxing club in Belfast in the early 1800s. It’s a traditional pub bedecked with mirrors and memorabilia and another candidate for the ‘best pint of Guinness in Belfast’ award. They don’t do food, so you’ll have to make do with a packet of scampi flavoured fries while you work your way through their massive range of whiskies though. A great place to spend an afternoon.

There’s loads more great places to eat and drink in the city, but for a short walk from the end of the tour you can’t go wrong with any of these spots.

And rest assured, none of this is sponsored content, they’re just our favourites and we wanted to share.  Enjoy!