Belfast and the Cinema (or the ‘Picture House’)

The impending release of Kenneth Branagh’s film ‘Belfast’ focused my mind on a subject that has increasingly interested me over the last years: the cinemas of Belfast. Perfect timing!

Cinema as we understand it today arrived in the world in 1895. Belfast as a booming, thriving city was quick off the mark and our first ever film screening took place the very next year at The Empire Palace of The Varieties which was next to the site of the original Kitchen Bar in Victoria Square.

By the 1930s the city had just over 40 cinemas, some emerging from the old music halls as they adapted and others as new constructs for a rapidly expanding audience.

The miserable and impoverished 1930s, with the cross-community Outdoor Relief Riots of 1932 (soon to be replaced by our more traditional sectarian riots of 1935), was the golden age of the Belfast cinema and indeed globally.

A wonderful roll call of powerful and evocative names sprinkled across the city, with some cinemas of truly fantastic architectural 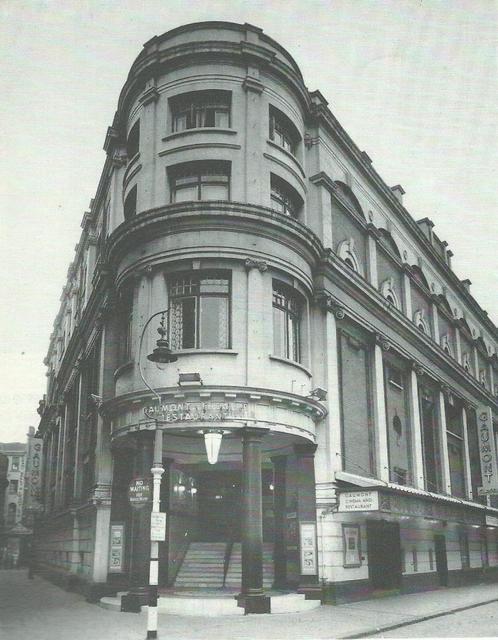 merit. The city centre had four picture houses around Castle Lane, Arthur Square and Cornmarket alone, including the wonderful Gaumont which stood where the repulsive and empty British Home Stores stands today, just a stone’s throw from the Royal Cinema at the junction of Castle Lane, Arthur Street and Arthur Square. Previously a music hall, the Royal became a cinema in 1916 with the proceeds of its opening day going to a charity supporting “the limbless soldiers of Ulster.”

Cinemas were woven into the bigger social picture of their time to an incredible extent. Hence their popularity – particularly in the 1930s, as people escaped the misery of reality in a world of movie-star looks and romance, and the laughter of the comedies. The Royal survived until 1961 before being inevitably sold for office space. Today a chunk of the site is occupied by a Starbucks, but the original building is long gone….

In North Street we had the beautiful Alhambra from 1905 to 1959. Previously a music hall, it had changed with the times but also had an unfortunate tendency to catch fire. The powerful Rank Corporation were its last owners and took its final combustion as an opportunity to close it down and move on. The 1950s was the decade that marked a slow but inevitable decline as the mass production of the cursed television changed entertainment access and habits.

readers as they survived into the 1980s. They were important in the city’s life, but I’m intentionally downplaying them here and giving priority to the institutions that didn’t last as late. It’s worth pointing out though that hidden behind the ugly cladding of the New Vic was the stunning original façade of the Royal Hippodrome theatre, right up until it was demolished in 1998.

Moving out from the city centre, virtually every main arterial road in Belfast had at least one ‘picture house’. The Ormeau Road had The Curzon* and The Apollo.  The 1,500-seater Stadium was the jewel amongst several cinemas on The Shankill. The Falls was home to Broadway, Clonard and The Diamond. The Cregagh had The Ambassador whilst The Apollo adorned the Antrim Road, and there were many more across the city.

Some of the buildings still exist but many were simply demolished. The Curzon today is apartments, The Ambassador is partially identifiable as the home of the famous Wyse Byse shop, (so that’s a positive at least). While the last trace of The Astoria in Ballyhackamore is that the adjoining street, Astoria Gardens, bears its name.

But probably the most unusual building to house a cinema was the ‘New’ Princess Palace on the Newtownards Road. The main 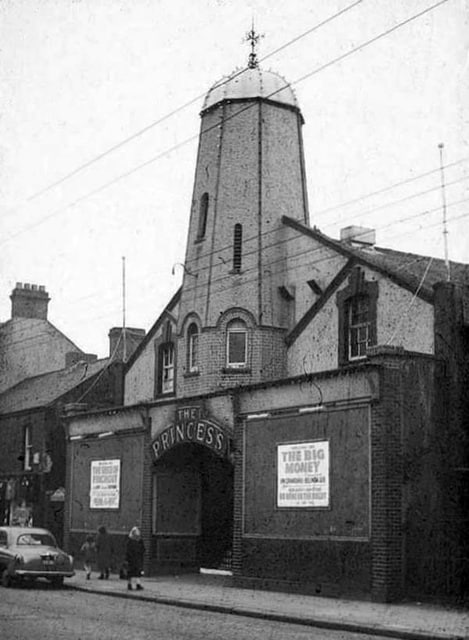 structure rising from an otherwise orthodox building evoked a range of descriptions, ranging from a foreign place of worship, to a windmill and a salt cellar. Today a small square building functioning as a bingo hall stands in its place.

Readers, it’s Belfast though, so politics and identity are never far from our door.

The Willowfield Picture House on the Woodstock Road was known locally as ‘The Winkie’ and was unique in being the only cinema in Belfast to be founded and controlled by a political party. The Ulster Unionist Party opened it in 1915 and it also served as the local unionist club. As a picture house it was a popular spot not least as it was the first in Belfast to introduce double (or courtin’) seats for amorous couples. It closed down in 1973 and for a short time became an Asian cinema for Belfast’s Pakistani community.

In later years cinemas were attacked particularly as ‘economic’ targets in the city centre during the grim 1970s. The Park in the middle of the very volatile Oldpark Road was forced to close in 1971. Defiantly the doors reopened in 1972, but then a bomb at the premises injured several people and it was closed permanently thereafter.

However, the real fun and games was at the end of the evening. For decades most Belfast cinemas had played ‘God Save The Queen’ as the last screening came to an end. Absolutely no problem on the Shankill or on The Newtownards Road of course, but in cinemas in the shared space of the city centre or in cinemas with a mixed Catholic/Protestant audience such as The Curzon it always added a certain tension at the end of the film.

Generations have tales of Catholics leaving quickly and possibly prematurely to avoid it or defiantly walking out during it. Most Protestants stood dutifully, ignoring the partial exodus of others, or glaring angrily. Verbal exchanges were not unknown. An English academic told me of coming to Belfast in the 1980s and being blissfully unaware of the dynamics. He and his local friend stood but he was aware of a couple near them striding towards the exit. A cinema employee exclaimed to the departing couple “here! The Queen!” – the reply from the doorway was “…here! The Pope!!” He had to learn quickly.

A nationalist friend told me that such a rendition would not have been tolerable in the Falls Road cinemas. In his words “The Three Stooges would have been found in the ashes!”

There were 40 pre-war Art Deco cinemas built in Belfast, but today only one remains – The Strand on the Holywood Road, which has 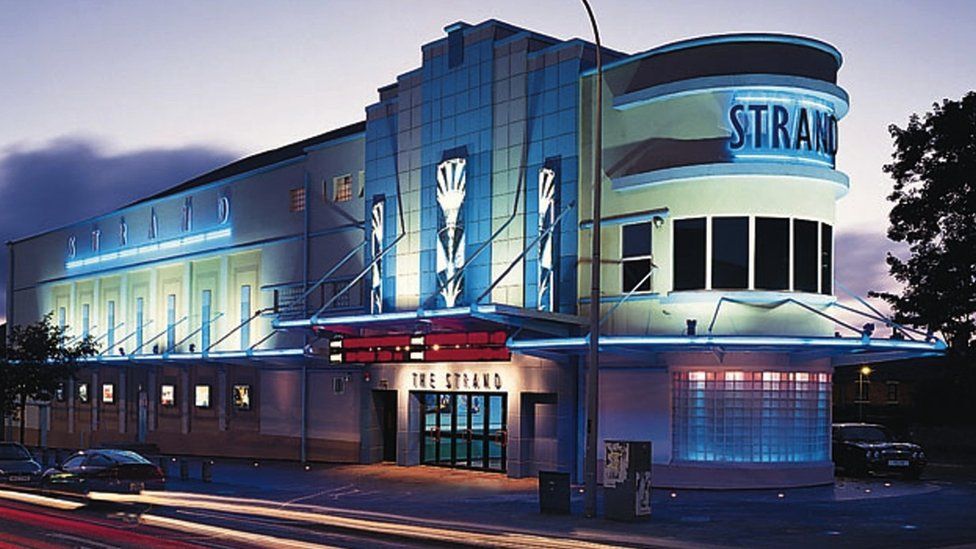 survived only by redefining itself as The Strand Arts Centre and expanding its activities.

(The Strand’s design was influenced by the nearby shipyards, and in the auditorium could be found three rows of port-holes on each side of the proscenium arch around the stage, which were back-lit to give the feel of being inside an ocean liner.)

I miss those cinemas.

*I used to do the door at The Pavilion Bar beside The Curzon a couple of nights a week in the late 1990s. The projectionist (whose name I now forget) came in after work each night for a pint before heading home. He always chatted on his way out. The last night when The Curzon closed for good, he had his pint and cried as he walked out the door. True story.